Should My Night Vision Monocular Go Behind or in Front of My Scope?

Monoculars How To
Night Vision Monoculars
By VB Team / June 20, 2017

Before, specialty night vision products are only used by the military and law enforcement personnel for easier target resolution. These days, though, night vision monocular or other devices are also often used by outdoor enthusiasts and hobbyists, especially for adventures which require clear night time vision.

While different devices such as monoculars and binoculars are readily available on the market, there are some questions that pop up to make the night vision experience more pleasing. One such question is whether the night vision monocular should go behind or in front of the scope.

Below is a list of the best-selling night-vision monocular products in the market:

Obviously, it is a matter of personal preference. The other might work for some people, but not for the others. That is why other devices such as night vision clip-ons were invented. It can allow users to mount the night vision device in several ways, depending on the need.

Aside from the preference, there are also other factors that need to be considered, when deciding whether to place the night vision monocular behind or in front of the scope.

Here is one of the many amazing and best-selling rifle mount monocular scopes you can have: 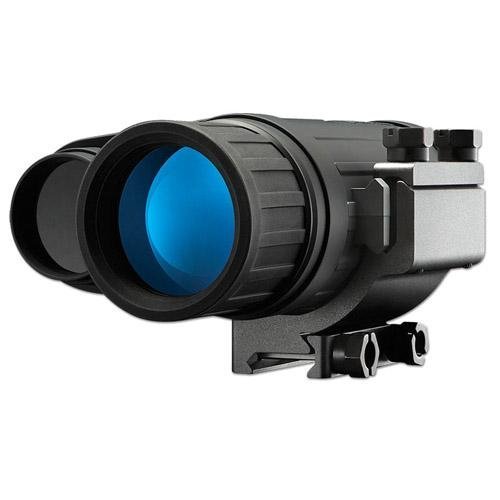 This nigh-vision rifle mount monocular scope is from a well-known manufacturer of optical products, Bushnell. It comes at a fair and reasonable price, an expense that could highly improve your rifle skills and experience significantly.

The product is very handy, easy-to-use, install and comes at an affordable and reasonable amount.

Take note that regular monoculars have to be mounted behind scope, while clip-on night vision devices are usually put in front of scope.

In Front of Scope

If you prefer to mount your night vision monocular in front of scope, there are actually a couple of ways to do so. The most recommended method is to mount it on a rail, while the other method is to clamp it on the day scope itself. However, it should be noted that when working with clip-on sights, you need to have at least 2x magnification because if lesser, the image will be too small that you will not be able to identify your target properly.

The advantage of using a clip on in front of the scope is that there is no displacement or difference in the position of your target. This means that you can easily transition from day to night, using only one telescopic device. You can clip it on or clip it off as needed.

When it comes to shooting, the best firearm mounted night vision scopes options are those that are attached in front of scope. This is because zero is not affected in any way and there is no change to the normal head position of the shooter. However, one of the downside is that it can place weight on the device and can also be more expensive.

Vision Binoculars Team is a team of individuals dedicated to providing the most up to date information on Binoculars and other optic's related items.